Focused scholarly activities and cooperate services are as follows: 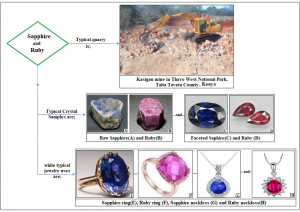 Sapphire and Ruby are among the top ten most expensive gemstones in the world. Sapphire is a blue variety of aluminum oxide (also known as corundum), basic chemical formula being Al2O3 which implies that the mineral is an oxide of aluminum metal. Ruby is the red variety of the same oxide of aluminum. Jewelry use of the two minerals rests on their characteristics, particularly unique deep blue and red colours, transparency, lustre, hardness and durability caused by the strong crystal structure of the minerals. Sapphire and ruby deposits are found in many countries worldwide such as; Sri Lanka, Kasmir , Burma, Madagascar, Kenya, Tanzania etc. The deposits occur in similar geological environments, despite the environments being geographically separated. These minerals occur prevalently in pegmatitic bodies of metamorphic belts in which they evolved through hydrothermal processes. 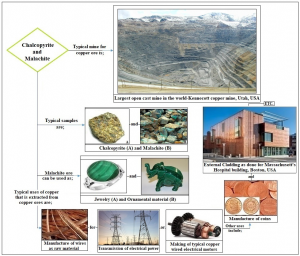 Chalcopyrite and malachite are the main sources of copper metal, their chemical formulae being CuFeS2 and Cu₂CO₃ (OH)₂ respectively. Chalcopyrite is often brassy to golden yellow in color while malachite has an opaque green colour and often banded. Chalcopyrite was formed as a volcanogenic massive sulfide ore deposit and also as a sedimentary exhalative deposits. The volcanogenic deposits involved circulation of hydrothermal fluids and subsequent concentration and deposition of the copper sulphate ore.  Malachite, on the contrary, is a secondary ore mineral of copper and forms through chemical alteration of other copper ores. Basically the ore is formed when carbonated water interacts with copper minerals, or when a solution of copper interacts with limestone deposit.

Ten leading countries in world copper production as of 2017 were Chile, Peru, China, the United States, Australia, the Democratic Republic of the Congo, Zambia, Mexico, Indonesia, and Canada. Bingham Canyon Mine, also known as Kennecott Copper Mine represents the largest open-pit mine in the world to date. It is located south-west of Salt Lake City in USA. The deposit is approximately four kilometers wide and as at September 2015its depth was over 1.2 km. In Kenya considerable occurrence of copper ores are known to be in Macalder area of South Nyanza. Copper ores are also sparsely distributed within the Mozambique Orogenic belt that traverses the country from Taita-Taveta County, through Machakos, Kitui, parts of western Kenya to Pokot and beyond. 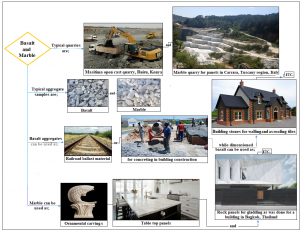 Basalts are most widespread of the volcanic rocks. They are fine grained having been formed by rapid cooling of molten material (lava) at the surface or near the surface of the earth. The lava was derived from the earth interior through magmatic processes of differentiation and forcefully ejected onto the earth surface. Basalt consists of silicate minerals which give the rock suitable construction properties such as high resistance to abrasion, considerable compressive strength and adherence to bituminous material. Marble unlike basalt, was derived from limestone (a sedimentary rock) through metamorphic changes of recrystallization at high temperature and pressure. It consists mainly of calcites as carbonate minerals. These minerals are of lower crystal strength compared to silicates that constitute basalt and are also vulnerable to acid attack.

Basalts are widespread and associated with volcanic centers other that rift valley faults. In Kenya, basalts occur as thick accumulations in the Great Rift Valley and its environs. Marble deposits are widespread in metamorphic regions worldwide. Production of marble is dominated by 4 countries. Italy leads in the production (from Tuscany region) followed by China, Spain and then Portugal. The 4 countries account for almost half of world production of marble and related decorative stones.

Basalt and marble play a notable role in construction works as geo-materials. They can be used mainly as dimension stones for finishing work on walls (gladding). Basalt is predominantly used as an aggregate for concreting in infrastructural construction work and as ballast material on rail roads. The two rock types can also be used for ornamental needs as carvings.